Archive for the Elder Placement Category

Wisdom from the Porch

A potter can only mold the clay when it lies completely in his hands.

We must leave people better than we found them. 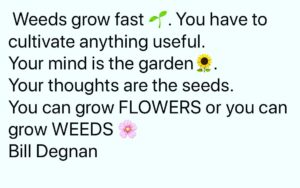 A tall, cowboy hat donned gentleman, accompanied by his
sweet angelic wife walked into my office a couple years
ago to thank my boss and myself for the wonderful job we
did assisting them with finding their new local home; an
assisted living facility that catered to their ever changing
needs. Not only can I call Bill and Anne my friends, but
sweetly hail them family. Uncle Bill is always to the rescue
with kind and empathetic words. If he’s nursing a broken
heart, playing Santa on the phone at Christmas, or
encouraging others to grab Aging by the horns and show
them who’s boss. Uncle Bill is never at a loss for words and
that is one of the best parts of him.
What once was a Wild and Fearless man, now sits a Calm, Patient and Wise man. What has
aging taught Uncle Bill you ask? To honor the seven Gifts of Living.
Share. Give Advice to others. Have perspective. Give Comfort. Correction. Take time to Pray,
and always Forgive.

I’ve started listening to what Bill says..
As I age out of my thirties, and watch my oldest son graduate High School, I realize that
what Bills says really means something. Using these perspectives on life, I see what really
matters in life. Family, Forgiveness and love, the rest just accompanies you to make you
whole. Having denial over the inevitable won’t make it go away. We are all going to “get
old”, we are all going to get grey hair, wrinkles, and aches and pains. Well, us that are lucky
so make the most of it. Enjoy it. Aging isn’t granted to everyone. Between myself and Bill
were here to break through the stigmas of aging and pass along wisdom and ease into
accepting assistance.

Make a Bucket List
Just because your hair turned grey, you can still achieve your goals. The
reality is what you can do, not what you want to do. What you can do, is
decide if this is how you want my life to be, or do you want to leave the
responsibilities to my children? Make a plan. Bill Says,” Your children didn’t
decide what car you were going to drive, or what your career would be; Why
let them decide how you will age?” Did you travel the US and see the sights?
Do it. Did you go to a concert and hear your favorite song? Do it. When you sit
on your porch and look out at your life, decide if you like what is looking back
at you because it’s never too late to change it. Look back on happy memories,
look out at your family, the legacy that you leave behind, look into your
future and know that you were the one that decided where you will be taking
your boots off and hanging your hat up when your time comes…

The Power of Positivity

?We saw this beautiful field and it made us appreciate where we live and our health. We thought we would stray a little from our facts and focus on positivity . We all may need a dose of it now .

?Ways to do this you ask?
Practice gratitude, keep a journal, open yourself to humor, spend time with positive people. Practice positive self talk.
?Start every day on a positive note. ?
Negative thinking can have the adverse affects; stress and emotional anger trigger processes in our brains that can be implicated in serious diseases.
Our one fact 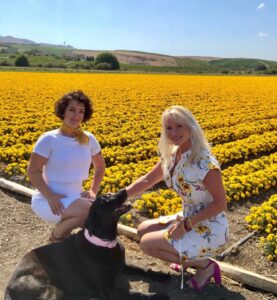 – Marigold’s are known as the Herb of the sun ?
?So stop enjoy the sunshine, and the flowers once in awhile! Trust us, it helps!

-Sadly, senior citizens are among the first to suffer from exposure to COVID-19. Living in close quarters is one of the highest contributing factors to exposure but the team from San Luis Obispo’s Elder Placement Professionals has prepared some guidelines to help ease concerns when it comes to choosing an assisted living facility.

The San Luis Obispo assisted living professionals have made it a point to be thoroughly familiar with the guidelines, regulations and best practices for COVID-19 safety and can help you prepare questions. The company works with assisted living facilities nationwide.

General questions about the facility and its programs

There are many important things to consider when selecting the right assisted living home. Along with the comforts of home such as good quality beds and furniture, healthy meals, staffing and medical concerns, activity programs rank high on the importance list.

Test the bed and furniture. Ask if you can have a meal before making up your mind. Prepare a list of questions related to your, or your family member’s medical conditions. Take a close look at the activity programs. Exercise, mental stimulation and socializing are important for a good quality of life.

Getting the best from professional resources

Choosing the best assisted living home can be challenging in normal circumstances and even more so in the face of the COVID-19 pandemic. The professional services provided by the San Luis Obispo assisted living professionals are comprehensive, covering every aspect of settling contentedly into a new home.

The company works with facilities all across the United States and takes special efforts to match elders to the best living situation.

Elder Placement Professional’s free services include finding the best options and helping negotiate cost that fit your budget for:

Ways to stay connected during Quartantine 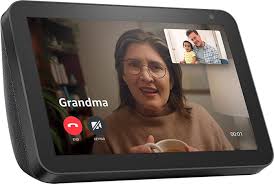 Looking for a way to stay connected to Grandma during these uncertain times? The Echo Show is a great way to drop in on your loved ones that are currently under quarantine/Covid 19 restrictions and unable to host a visitor. Grandma and Grandpa can listen to News updates, watch Youtube videos, listen to Amazon Music, even watch HULU!

Grandma can navigate Echo Show using both her voice and or the touch screen. Here’s how: Go to the home screen: Say, “Alexa, go home.” Featuring adaptive brightness, the Show can detect the ambient light in the room and dial the screen brightness up or down automatically which is perfect for seniors aging eyes and or light sensitivity. What a perfect way for loved ones to stay connected, but keep grandma in the know with current events and feel like she has a visitor no matter the distance between.  Stay connected, and be able to drop in on Grandma and see what she is up to with the Show.

What has changed the lives of all these people and many more around the world? The Alinker walking bike is designed for how people want to live. The yellow bike allows users, including amputees, to use their legs to move. With a “footprint” smaller than a wheelchair, the Alinker is welcome in grocery stores, museums and malls, as well as outdoors. The user sits upright at a level nearly as tall as standing height, allowing for easy social interaction.
“Over my dead body will I use one of those!” Barbara Alink’s mother was expressing her distaste for that all-too-common device used by older adults to get around: the walker. She didn’t like the stigma associated with the device; she wanted to stay more active. Luckily, her daughter is an engineer and took heed of the need for a walking assist that would allow movement and be perceived as cool.

Who Is It For?

Now, it’s not just older adults who are using the bike. Landmine victims, amputees, people with multiple sclerosis and other degenerative diseases, those with back pain, and many for whom walking is painful use the Alinker. More than 60% of people who use a wheelchair can still move their legs and potentially ride the Alinker. Users like that it doesn’t look like a medical device.
“You’re perceived completely differently. You’re standing up. You’re at eye level,” says Ceilidh Corcoran, 40. Diagnosed with a hip condition four years ago, after two surgeries she started limping. Soon after, the pain of walking drove her to a wheelchair. She negotiated life with a scooter, wheelchair and crutches, then saw an Instagram post from actor Selma Blair, who has MS. It featured a photo of Blair on her Alinker, and text that read, “I got places to go! Sometimes I can’t do it on my own two feet.” Blair enthused about her bike, and Corcoran longed for one for herself.
After a crowdfunding campaign and some financial help from Blair, Corcoran is loving her new bike. “I used to get sympathy smiles. Now I get genuine smiles,” she says. “I’m really hurting this week because I did so much last week. You totally overdo it (at first), but it’s such a great feeling.”

The Alinker has five distinct advantages:
Users also give it kudos for its portability. The 26-pound bike folds up easily for transport in the smallest car. “I always have a smile on my face when I’m on it, and it’s such a great feeling!” enthuses one Vancouver user. “Instead of sitting in the wheelchair and feeling a lot more disabled, this makes me feel like I’m on my way to becoming healthy again. I can just take it anywhere.”
Back to Top

We would like to take a moment to honor Great Women in History, Did you know that Julia Morgan, whom designed our local “Monday Club” here in San Luis Obispo, was hand-picked by William Randolph Hearst as the Architect for Hearst Castle, for his sprawling million plus acre ranch in Chihuahua, Mexico, but that she single handedly designed over 700 structures in California? Julia Morgan attended Berkeley University where she was the only female engineering student. Not only was Julia raised by a strong and influential woman, she proved that that everything is possible. Julia became the first woman to earn a certificate at the prestigious Ecole de Beaux-Arts.

There have also been women to who have paved the way for others in out Armed Forces; that also have amazing stories to tell. General Ann Dunwoody ,65, was the first woman to command a Battallion, she was also the first woman General Officer at Fort Bragg. Later, she was the fist woman in Us History to be promoted to the rank of four-star general. Way to go!

Acknowledging these amazing women blazing trails for our future proves that anything is possible. Thank you to our Armed Forces that dedicated a memorial to all these great women and more, telling their stories serving our Country.

Cheers to these amazing Women, and the many that will follow!

“My buildings will be my legacy… they will speak for me long after I’m gone.” –Julia Morgan

We wanted to remind you to “Stop and smell the Roses” once in a while… Did you know, that researchers have discovered that a simple sniff test, when combined with a brief cognitive exam, can help predict the likelihood of developing Dementia and or Alzheimer’s? Researchers have administered smell tests with as little as five odors. In that test of nearly 3,000 adults, participants had to identify the odors of peppermint (easiest), fish, orange, rose and leather (hardest). Five years later, the results found that older adults with “olfactory dysfunction” (those unable to correctly identify at least 4 out of 5 odors at baseline) had double the chance of developing dementia within the five years following the test. “We think a decline in the ability to smell, specifically, but also sensory function more broadly, may be an important early sign, marking people at greater risk for dementia,” says senior author Jayant M. Pinto, professor of surgery at the University of Chicago.

Fact: Women have a better sense of smell versus Men.